Numerous scientific studies support and demonstrate the benefit of the consumption of extra virgin olive oil on our body, and many are the articles published in journals of international scientific prestige such as Nature, Science or The Lancet.

There are many qualities that this oil has, among them, antioxidant and anti-inflammatory properties, cardiovascular protection and protection against memory loss, prevention of dementia, diabetes and cancer; as well as moisturizing, toning and repairing the skin so it not only takes care of us inside but gives us a healthier appearance. Therefore we can say that extra virgin olive oil helps us to live longer and better. 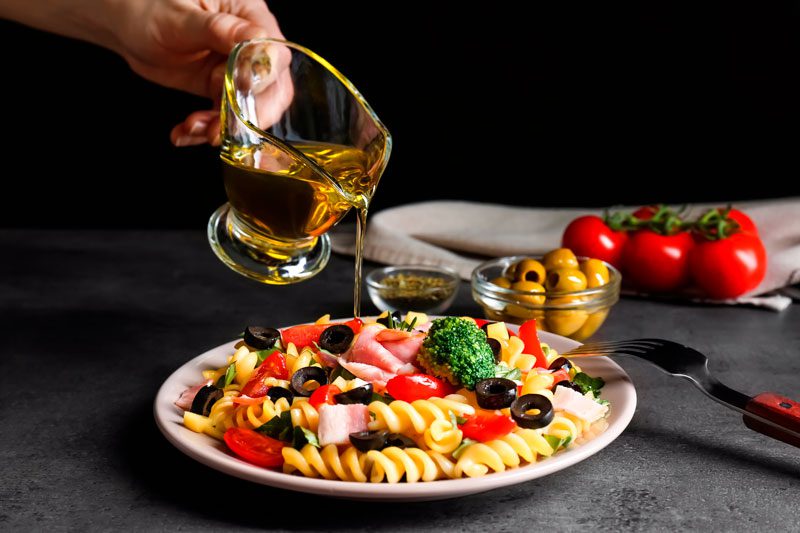 Antioxidant.- In extra virgin olive oils, biophenols with very important antioxidant properties and functions in the control of atherogenesis, cancer prevention and improvement in the aging process have been found and quantified.

The minor components of extra virgin olive oil, mainly hydroxytyrosol and tocopherol, are antioxidants and free radical scavengers.  Extra virgin olive oil is one of the essential components of the Mediterranean diet, it is rich in oleic acid (it represents 29% of the daily caloric intake) and antioxidants (vitamin E and polyphenols).On the skin it performs a protective and toning effect of the epidermis by the antioxidant effect of vitamin E (Anti-aging effect)

So many are the benefits that numerous studies attribute to oleocanthal its anti-inflammatory properties, among which we can highlight the treatment of pain in adults or degenerative diseases such as osteoarthritis.

Cardiovascular Protection.– It is widely scientifically proven, and this is supported by numerous investigations, that extra virgin olive oil maintains the level of HDL cholesterol and reduces LDL cholesterol because it is rich in oleic acid, a type of monounsaturated fat that exerts a direct benefit on blood vessels. Several trials also indicate that it is a natural regulator of high blood pressure as well as a cardioprotective element in preventing atherosclerosis.

Extra virgin olive oil has a high content of natural components such as carotenes or polyphenols, substances known for their anti-inflammatory and antithrombotic action, the effects directly relate to the aforementioned arteriosclerosis, a disease that causes narrowing and hardening of the arteries due to a multitude of causes among which we can find unhealthy habits, poor diet or simply age. Arteriosclerosis is responsible for a large number of cardiovascular diseases, such as angina pectoris, myocardial infarction, high blood pressure and peripheral vascular disease, and now is the so-called pandemic of the first world. Olive oil consumption could help explain the low cardiovascular mortality rate found in southern European Mediterranean countries, compared to neighboring countries, despite the high prevalence of coronary heart disease risk factors.

Memory loss and dementia.- At the level of the nervous system, the consumption of extra virgin olive oil prevents memory loss and mental weakness, maintaining cognitive functions in healthy elderly subjects which seems related to the role played by oleic acid in maintaining the structural integrity of neuronal membranes.         Many studies link the prevention of memory loss, dementia and the prevention of the onset of Alzheimer’s disease with the consumption of extra virgin olive oil.

A study conducted by Temple University in Philadelphia shows that the consumption of extra virgin olive oil could reduce brain deterioration caused by Alzheimer’s disease. These researchers say that extra virgin olive oil “protects memory and learning ability and reduces the formation of beta-amyloid plaques and neurofibrillary tangles in the brain,” classic markers of Alzheimer’s disease.

Another study, among the numerous published, led by scientist Tommaso Ballarini at the German Center for Neurodegenerative Diseases (DZNE) in Bonn (Germany) suggests that “consuming a diet high in unsaturated fats, fish, fruits and vegetables, and low in dairy and red meat, may actually protect the brain from protein buildup that can lead to memory loss and dementia.”

Diabetes and Cancer.- The evidence is becoming clearer every day and everything points to eating a diet based on vegetables, fruits, legumes, extra virgin olive oil (Mediterranean diet), practicing healthy lifestyle habits, as well as avoiding a sedentary lifestyle; preventing noncommunicable diseases such as cancer or diabetes.

A study by Spanish scientists has shown that extra virgin olive oil can contribute to the prevention and treatment of breast cancer, thanks to its main element, oleic acid.

The conclusions of the study, carried out from genetic techniques and led by scientist Javier Menéndez, a molecular biologist at the Northwestern Health Research Institute in Chicago, have confirmed that the intake of oleic acid considerably reduces one of the oncogenes associated with the most aggressive tumors.

Another study from the University of the Basque Country (Spain) reveals that a Mediterranean diet rich in olive oil is able to reduce in the long term the need for medication of patients with type II diabetes.

The clinical trial, as explained by D. Fernando Arós, a researcher who has participated in this work, has been carried out among 3,230 diabetics for more than three years who were randomly assigned three diets. The first of the dietary guidelines included, along with the Mediterranean diet, extra virgin olive oil; the second swapped the oil for a mixture of nuts, and the third recommended a low-fat diet.

The professor of Internal Medicine at the University of Córdoba, Francisco Pérez, declared at the Ist Congress on the Culture of the Olive Tree, held in Jaén “that it is essential to investigate extra virgin olive oil because it is a product that from the point of view of its composition has many little-known components”.

According to Francisco Pérez Jiménez of the Lipids and Arteriosclerosis Unit of the Reina Sofía Hospital in Córdoba, only one tenth of the benefits of extra virgin olive oil are known. So far, the advantages of olive oil to reduce cholesterol, prevent cardiovascular diseases or others such as cancer or diabetes are recognized. It has also been demonstrated that its high antioxidant power and its contribution prevent the recurrence of myocardial attacks. However, in order to continue advancing in knowledge, research and resources are needed. The latter focus, above all, on the advantages provided by the unique components of extra virgin olive oil.

This website uses cookies to improve your experience while you navigate through the website. Out of these, the cookies that are categorized as necessary are stored on your browser as they are essential for the working of basic functionalities of the website. We also use third-party cookies that help us analyze and understand how you use this website. These cookies will be stored in your browser only with your consent. You also have the option to opt-out of these cookies. But opting out of some of these cookies may affect your browsing experience.
Necessary Always Enabled
Necessary cookies are absolutely essential for the website to function properly. This category only includes cookies that ensures basic functionalities and security features of the website. These cookies do not store any personal information.
Non-necessary
Any cookies that may not be particularly necessary for the website to function and is used specifically to collect user personal data via analytics, ads, other embedded contents are termed as non-necessary cookies. It is mandatory to procure user consent prior to running these cookies on your website.
SAVE & ACCEPT